This week, we’re featuring Uncooked Foods & How to Use Them: A Treatise on How to Get the Highest Form of Animal Energy from Food: With Recipes for Preparation, Healthful Combinations and Menus by Mr. and Mrs. Eugene Christian. This particular volume is a recent addition to Special Collections. Published in 1904, it’s actually the 5th edition, so this husband and wife team seemed to be on a roll… 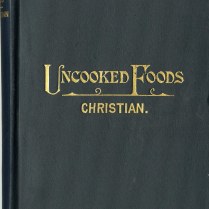 Opposite the title page is a portrait of the authors. 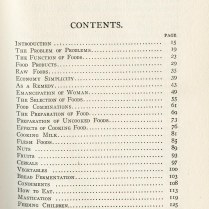 The table of contents includes a list of narrative and recipes sections.

The table of contents includes a list of narrative and recipes sections.

The book has a number of narrative sections at the beginning, including one defining raw foods. 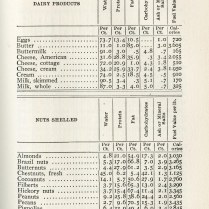 The authors included several pages of USDA charts on the values of food. They did include meat so that readers could compare the benefits of other proteins. 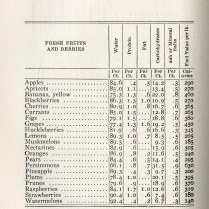 But their focus was really on fruits, veggies, and other foods that could be consumed uncooked.

Some sections include an introduction, like this one, explaining why soup recipes were added to the book.

Sample sandwich recipes….which aren’t as unique as some of the things we’ve seen on the blog before. 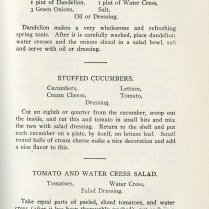 Sample salad recipes, most of which would still appeal to people today. 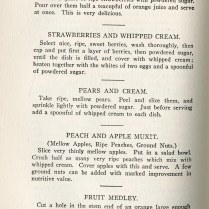 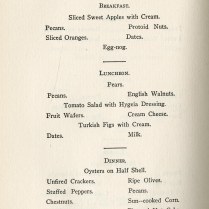 There are several pages toward the end of the volume containing suggested menus, like these…

Eugene Christian was the more prolific of the pair, authoring a variety of books on food, diet, nutrition, and health in general between 1900-1930. His wife co-authored a several books with him, however. Uncooked Foods & How to Use Them features a little bit of everything: directions on how and what to eat, how to prepare foods (very little!), sample recipes, sample meal plans, and some about why the idea of eating raw foods was important to the authors. For Special Collections, this piece is a great new addition. While we have a number of volumes on vegetarianism in the 19th and 20th centuries, this is the first book we have on raw foods and the raw foods movement. (Now, we’ll be on the lookout for more!)

You’ll notice that there are a few cooked/prepared foods in the book, though they seem to be carefully chosen and few and far between. The section on soup, for example, is prefaced by the statement that: “We give here a few recipes for soups only because the soup habit is so firmly fixed in the mind of the housewife and the epicure that they can hardly conceive of a decent dinner without them. All soups may be warmed sufficiently to serve hot without cooking.” All but one of the few meat or fish dishes are smoked or dried. The others are all raw, including a beef tartare recipe.

So whether you’re hankering for egg-nog with fruit juice, raw carrot and turnips with (or without) salad dressing, or prune pie, this book could be for you. You’ll just have to come by and see. Until then, happy eating!