April is National Poetry Month. I know, you’re probably asking why I’m even bringing that up a blog devoted to culinary history materials. The truth is, it might just surprise you how much poetry there is on the subject of food, eating, and everything that goes along with it. Or maybe you aren’t–after all, food is so much a part of our lives. And we have touched on this subject before, with specific, culinary-focused literary items. Whether you’re surprised or not, for a couple of posts this month, I thought we would look at some poetry from other publications in our collections that somehow involve food. (And not just because both of those things have a special place in my heart.)

When it comes to the topic of fruit, there are a lot of poems. Seriously, a LOT. While looking for a specific on by D. H. Lawrence, I found five other ones, each dedicated to a specific fruit. The pomegranate has a long history as a symbol and plays a part of many-a-poem (and story), so it seemed a good place to start.

Lawrence talks briefly about pomegranates growing on trees, which got me thinking about Robert Frost’s “After Apple Picking.” Although it does describe apples, it also focuses on the act of acquiring them from their trees.

From pomegranates and apples, we’re switching to stone fruits for our final poems. Wallace Stevens’ “A Dish of Peaches in Russia,” peaches are repeatedly tied to images of places for the speaker.

from The Collected Poems of Wallace Stevens, c.1954

Last up for this week is probably the most well-known of this group. These days, you’re likely to find it used on the Internet as a meme, but William Carlos Williams’ poem about plums has been iconic for a long time! 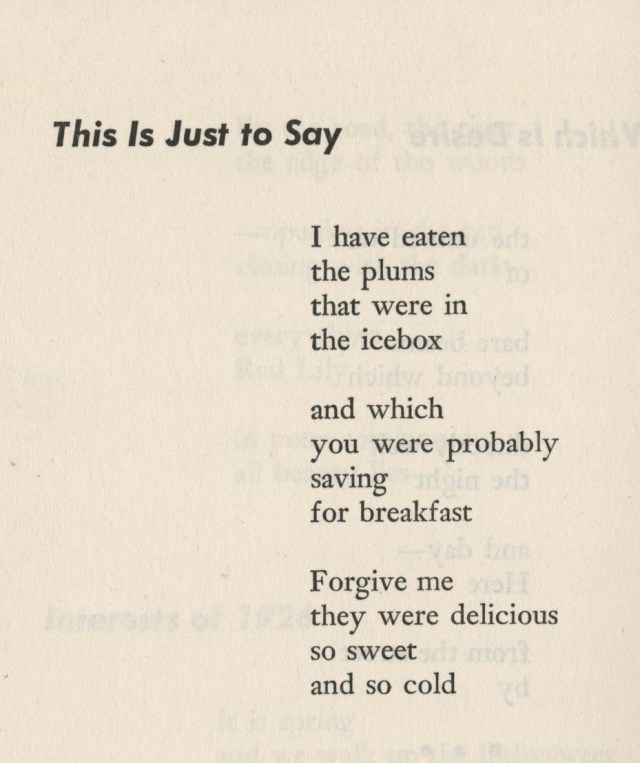 from The Collected Earlier Poems of William Carlos Williams, c.1951

In our next post, we’ll look at what do to once you have some food gathered (in other words, poetry about invitations to dine and the act of eating).

Although we don’t have a copy in our collection, my favorite poem laden with fruit imagery is Christina Rossetti’s “Goblin Market,” which part poem, part instructive lesson for young women in the Victorian era. It’s more than a little creepy as the poem continues, but the first part reads like a trip through the produce section! Did I miss your favorite “fruit” poem? Feel free to share in the comments!