I don’t know why summer always has me thinking and blogging about sandwiches. Apparently, it’s also a time we acquire materials on sandwiches (we’ll have plenty more bread-and-filling-based publications to share down the road). Today, I found one from 1924, Mrs. Scott’s Sandwich Book: Selected Recipes for Pleasing Appetizing Meals and Light Summer Lunches. Fitting, right? This publication is actually a supplement to a newspaper, The North American. 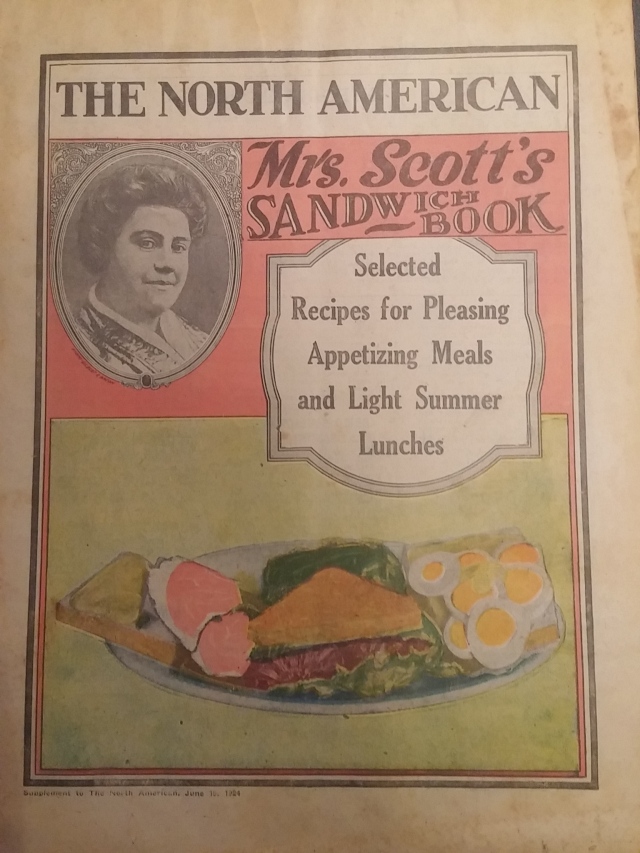 The short introduction states the following:

They [sandwiches] are made of meat, cheese, eggs, vegetables, salads, fish, dried fruits, nuts, jellies, preserves–of practically everything. And there are hot sandwiches–How good they are!–as well as cold ones. Indeed, this might almost be called the age of sandwiches…Along with the change in the nature of the sandwich has come a decided change in its use. once it was though of merely as a dinner bucket or picnic attribute. Now sandwiches are served at every sort of meal, except formal dinners, and even in the most fashionable of hotels and restaurants they are constantly in demand. 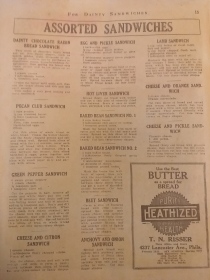 There is, of course, a recipe for our old favorite, the lettuce sandwich. And there’s a more fancy tomato and lettuce version or lettuce and cream cheese. If you’d like to pair your lettuce with something a little more unique, you could try peanut butter, dried sausage, or Spanish onion. If you’re a fan of condiments (sweet or savory), there are sandwiches that cater to you, too! Try a Tartar, Jelly, or Brown Sugar Sandwich.

The few remaining pages are full-page ads: one for Supplee Ice Cream and one for Mrs. Schorer’s  Pic-o-naise and Olive-niase. Yes, you read that right. The latter is pretty obvious, but I wasn’t able to find an ingredient list for the Pic-o-naise. If I had to guess, based on the picture, I’d go with mayo mixed with pimento and olive or pickle (definitely something green and minced). We have a pamphlets for Supplee milk  and Mrs. Schlorer’s products elsewhere among the culinary materials, too. Anyway, for a 16-page supplement, Mrs. Scott’s Sandwich Book has a lot to tell us about sandwiches of the time. And hopefully you’re feeling inspired for your next picnic!

I know. It’s the post you’ve been waiting months for…or dreading for just as long, wondering when I might find MORE frosted sandwich recipes to share. The long wait is over! (By the way, if you haven’t seen the previous posts in this series, you may want to check out #1, #2, and #3.)

Our first two recipes come from Sandwiches for Every Occasion, a booklet sponsored by Town Talk Bread. One looks like our traditional frosted loaf sandwich and includes recommendations for two ham loaf and egg-olive fillings. In the past, we’ve seen frosted sandwiches with one, two, or three layers and one of two “frostings”: cream cheese or mayonnaise. Here, we have a new frosting: cottage cheese. (I started considering whether cottage cheese would have the strength to stay on sides, or if it would sort of start to slide off. Then I stopped myself–some things are best left un-pondered.)

Our second example from this booklet is a holiday-themed frosted sandwich! And a timely one, at that. I mean, what 4th of July celebration would be complete without cucumbers, tomatoes, and mayo rounds with a cream cheese shell, right? (It’s all very…round.) The best part is, these can be adapted to other parties and holidays. Just swap the flag on a toothpick for a piped heart-shape colored red or a baby shower decoration…

After considering alternative decorations, I started thinking about color. If you really wanted to get into a theme, you could color your “frosting.” It turns out, despite the fact that we haven’t seen it in previous posts, I wasn’t the first to think of this idea.

This party loaf from the Betty Crocker Recipe Card Library is frosted with yellow-tinted cream cheese (thinned with light cream). It has three layers that caused a few of my coworkers to give it strange looks. I toyed with launching a new guessing game called, “Name That Filling!,” but thought better of it. If you’d like to guess, you’re welcome to do so. I’ll list the fillings at the bottom of the post. 🙂

Next up isn’t a frosted sandwich exactly. It’s a bonus frosted item–an appetizer I found while looking for the party loaf above. That’s deviled ham, rolled into logs, and frosted with cream cheese. It seems close enough. Put it between to crackers and voila!

Our next frosted item comes from another pamphlet, “Sandwich Secrets,” sponsored by Dreikorn’s Orange Wrap Bread. I scanned the whole page, since I thought any of the “sandwich pastes” at the top could also be potential fillings. We’re back to black-and-white images, which leaves much to the imagination, for better or worse. I did notice this version seems to have a far larger bread-to-filling ratio. And, it seems to have less frosting than many other variations. Perhaps that for the best? 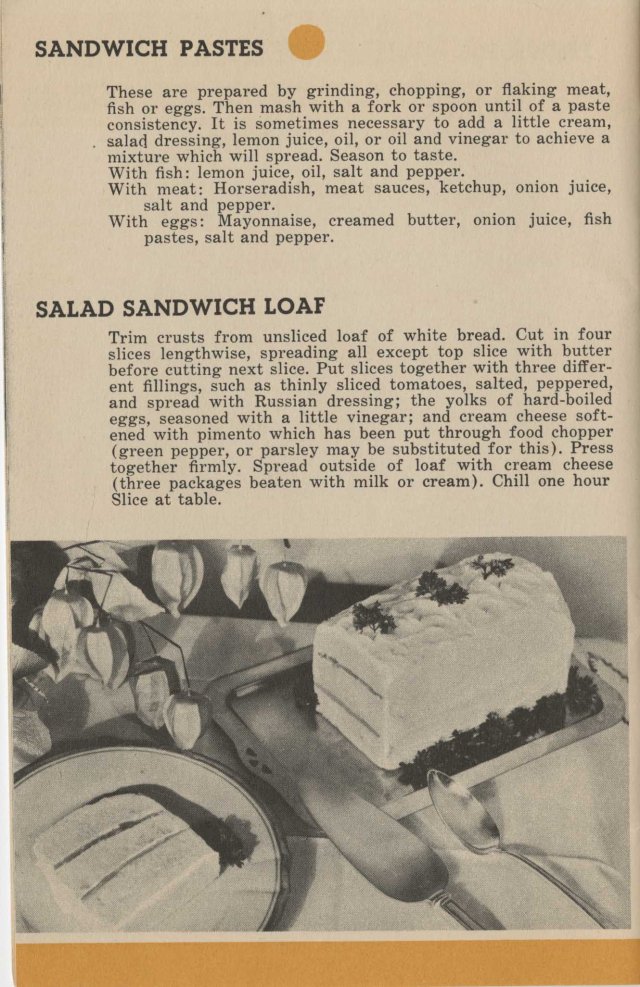 The last image in this week’s fascinating/terrifying post isn’t a sandwich, either. I’ve bombarded you with enough of those for the moment. It’s more…something to think about. The frosted sandwich isn’t something you’ll see on tables these days (no doubt we can guess why). But it seems there should have been more recipes during the height of its popularity. Besides the use of food coloring, “frostings” could have been adulterated in all kinds of way, including the addition of other flavors. So, this week, I’m leaving you with a selection of flavored mayonnaise recipes from Best Foods, Inc. (and the picture of a salmon salad mold that you could mistake for a frosted sandwich, unfortunately–I did at first).

Just imagine the possibilities for your next party! Got olives in a filling? Use an olive mayo. Try a chili sauce mayo on that ham and chicken salad filled sandwich. Using (gulp) fish/seafood fillings? Maybe it needs sour cream mayo. There’s even the potential for a sweet(er) frosted sandwich, coated in fruit juice mayonnaise!

All my making fun of frosted sandwiches aside, I think they make a great example of a past culinary trend that materials in our collections can help you learn more about. There are foods that come and go, some once and some in waves. Other trends survive decades or even centuries. Researching culinary history is fascinating, fun, and a great way to come up with some strange facts to share with friends and colleagues. Whether you’re curious, scholarly, or both, you’re always welcome to visit us in search of recipes.

As you may recall from last week, it’s National Sandwich Month. To wrap-up (pun intended) August, we have a wonderful pamphlet with nearly 100 pages of international sandwich delights.  Well, nearly 100 pages of international sandwiches, at least. This week, we present Frederic Girnau’s Sandwich Book of All Nations: Over 300 Ways of Making Delicious Sandwiches, Appetizers, and Canapes by Ruth Elizabeth Mills, published c.1945. 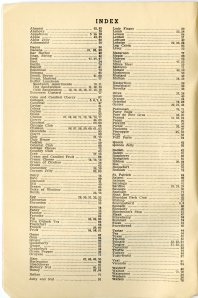 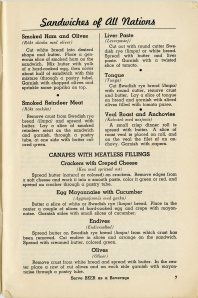 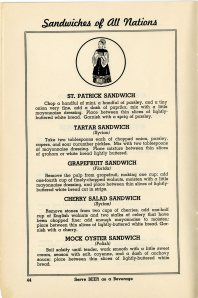 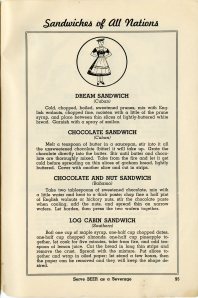 Amazing what you can do with a couple pieces of bread and just about anything you have lying around…Even if you don’t have a traditional filling. Just make a sandwich of bread and tartar sauce or pieces of fruit! In addition to the ones above, there is a whole page on cherry fillings, as well as other citrus fruits, dates, and prunes. If you’re seeking the more unique, there’s homemade peanut mayonnaise, tomato jelly, cream cheese and beet, or nasturtium sandwiches.

Our copy of Frederic Girnau’s Sandwich Book of All Nations: Over 300 Ways of Making Delicious Sandwiches, Appetizers, and Canapes is one of about 5 in public and academic library hands and is well worth a glance or two. The Frederic Girnau referenced in the title was actually the publisher and Mills wrote several books the company during the 1940s. She authored two books on preparing seafood and fish and game and waterfowl the “sportman’s way,” as well as pamphlets on cookies and international foods.

On a side note, if you asked me (archivist/blogger/foodie Kira, as usual!) in 2009, before I started working at Virginia Tech, before I encounter the History of Food & Drink Collection here, and before I spent 40% of my time thinking about food (back then it was only about 20%), the idea of a simple lettuce sandwich never occurred to me. Oh, how ignorant I was in those days! As regular readers may know, the lettuce sandwich has become a frequent guest on our blog, with a startling number of variations. This publication is no exception, with two recipes of its own…one of which starts with dipping the leaves in mayonnaise! (The other involves chopping leaves into strips with scissors, THEN applying the mayo.)

Lastly, it’s difficult to ignore the blatant and repetitive advertising going on in this publication. The bottom of every page reminds you to serve BEER with your sandwiches. It’s only fair to explain why this is the case, since it also gives me the chance to share the somewhat dated advertisement printed on the back. Without further ado, the front and back covers of our feature item: 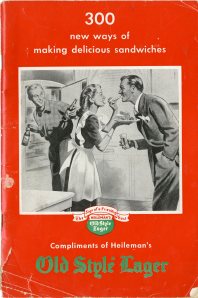 Because nothing says “let’s picnic” more than a swell mustard-and-bread sandwich and an icy cold beer!

Until next week, when we give up bread and meat for some children’s adventures in the kitchen, keep making those sandwiches.