This week’s lesson is a sweet (and bubbly) one! If you’re remotely into food history, you’re probably aware that perspectives change, often rapidly. What’s good for us one day is bad the next (and may be good again next week). When it comes to carbonated beverages (aka soda), well, there’s definitely some history there. This week, our post features two pamphlets from American Bottlers of Carbonated Beverages. Admittedly, they have certain bias, but they also offer a fascinating perspective on a time when soda didn’t have the reputation it might today. First up, there’s “Delightful Recipes with Carbonated Beverages.” 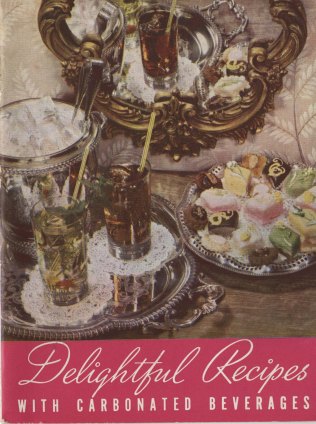 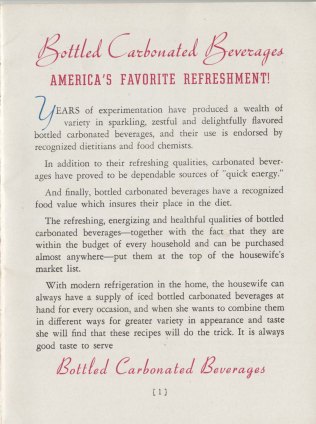 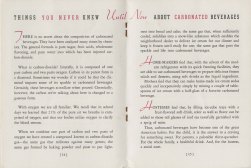 While “Delightful Recipes” isn’t dated, it’s probably from around the same time period as our second pamphlet, “Sparkling Party Recipes,” which comes from 1955. 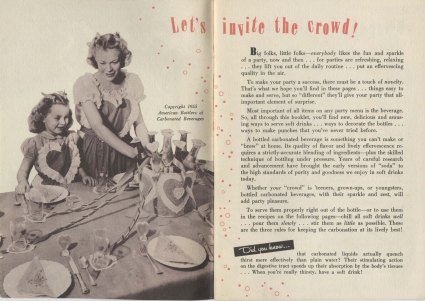 There are a lot of interesting things to note about both of these pamphlets. We can start with the obvious–the recipes–which go beyond what you might expect. There aren’t just punches. You’ll also find salads (with and without gelatin, our constant friend), desserts, and even a sauce or two. There are also a handful of others recipes that don’t contain carbonated beverages–probably a good thing, since I’m not sure I want to know how one works ginger ale into a frosted sandwich…

There are plenty of party hints and party themes for the hostess looking to impress, too. Bringing bottled drinks on a picnic? Put a dish full of ice at the bottom of the basket to keep them cold. Want to coordinate your food and drink? Try dressing up your sandwiches and drink bottles (though that image of grinning food and beverages is a little creepy)! Want to confuse your taste buds? Freeze cubes of one flavor and pour another flavor over them!

And then there’s the health information, which was my point from the beginning. Both of these pamphlets spend time on the benefits and nutritional value of carbonated beverages. “Sparkling Party Recipes” includes a page about how carbonated drinks are used in hospitals. “Delightful Recipes” notes that:

Carbon dioxide has a peculiar dietetic value. Medical authorities point out that, when taken internally, it acts as a digestive stimulant, increases appetite and promotes absorption of food…The energy in bottled carbonated beverages comes from the pure sugars used.

This pamphlet also offers a list of “noted authorities who have put on record their statements as to the health value of carbonated beverages.” The statements were available by writing to the sponsor, the American Bottlers of Carbonated Beverages. And, no doubt, solicited by them for just this purpose. In any case, this touting of the health benefits seems a bit different from arguments today about the high amounts of sugar and sugar alternatives in modern sodas.

Both of these pamphlets are part of the Culinary Pamphlet Collection (Ms2011-002), which we’ve highlighted before. However, it’s an ever-expanding collection and there are always new items to share. With about a month before the students come back, our “Summer Cooking School” lessons will continue for a little longer. Then I’ll have to find some new historic items to share. Until then, remember carbonated beverages aren’t just for the glass. They can be the highlight of any party…or hot weekend (like the one we’re headed for here in Blacksburg).