For those of you who follow the cocktail scene, this week (June 1-7) is “Negroni Week.” It’s a relatively new tradition from the people at Imbibe magazine that celebrates the cocktail and is a chance to give back to charity. Bars around the globe serve their own variations of the drink and donate to their favorite causes. It’s also my inspiration for this week’s blog post. (I promise there is a point to the introduction that follows, we’re just taking the winding road–Like any good cocktail, the road to a good blog post should be savored!)

The Negroni is a cocktail, like many, with a somewhat uncertain origin, though it most likely was invented in Italy in the 1910s or 1920s. While you can find all kinds of variants with different names that have developed since then (much like the Martini’s many, many variations), the classic Negroni is simple: 1/3 gin, 1/3 sweet vermouth, and 1/3 Campari. For the moment, we’re interested in Campari…sort of.  Campari is an herbal-and-fruit-based liqueur made in Italy. In other words, it’s a type of bitters. Bitters are basically botanicals pickled in water and alcohol used in small quantities to flavor cocktails. (The origin story and history of bitters are far more complex, but those are topics for another blog post.) As a cocktail ingredient, there used to be a few specific brands that were common, including the Angostura bitters you can still buy today. The rise of the craft cocktail in the last decade has led to flavors of bitters just about anyone can dream up (I can speak from personal experience, having made a few batches myself). However, it’s Angostura bitters we’re featuring this week.

Our copy of For Home Use is from 1937, and the publication was already in its 8th edition at that point. Angostura Bitters, originally called “Aromatic Bitters” by their creator Dr. Johann Siegert, were first sold in 1824, though they wouldn’t exported beyond South America until 1830. From the book’s own pages, you’ll see that like others, Angostura bitters weren’t intended to be a cocktail ingredient (they predate the cocktail by a long shot–pun intended). 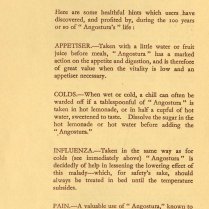 Toward the end of the publication, there are two pages of “Healthful Hints,” which take bitters into another part of the domestic sphere. The root of bitters (another pun intended) comes from more medicinal angle. One branch of the bitters evolution went in the direction of patent medicines, “cure-alls,” and the like, which were popularized in the 19th and early 20th century. But it didn’t stop there. From the cocktail glass to the dessert glass and from the soup bowl to punch bowl, Angostura bitters continue to be a versatile ingredient today.

Stay tuned for more about bitters, cocktails, and more in future posts. And, as always, if you’re in the neighborhood, pay us a visit. We love to share everything on our cocktail shelves, from Angostura bitters to recipes for Zombies.