My French is pretty much non-existent, so apologies in advance for my inevitable translation and synopsis errors in the post that follows. Several years of Latin means I can read words and sometimes correctly interpret sentences, but we’re winging it a bit this week. On the other hand, Les Gourmandises de Charlotte, a children’s story that borders on a fairy-tale, literally stuffed with food (pun-intended), has to be shared!

First published in the late 19th century, Les Gourmandises de Charlotte went through several editions between 1891 and 1915. We are lucky enough to have an early edition from 1891 (with a slightly fragile binding). This is the story of Charlotte, a little girl who gets a giant cherry-flavored candy egg for Easter, and all the trouble it causes. She develops a taste for sugar and sweets, first losing weight and eventually, in fairy-tale style, actually shrinking in size, as she refuses to eat anything else. She has a series of adventures while tiny (which are really meant as lessons to show Charlotte–and other children/readers–the importance of good eating). She regains her normal size, only to balloon up, facing mockery from other children. In the end, though, she sees the error of her ways and agrees to eating a more balanced diet. 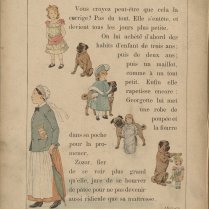 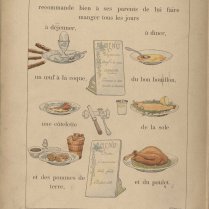 Primarily, materials in the History of Food & Drink Collection, including many books in the Ann Hertzler Children’s Cookbook and Nutrition Collection are cataloged with cookbooks, medicine, nutrition, and other related call numbers. Les Gourmandises de Charlotte is one of the outliers. While there is a clear message about food and nutrition, this is first and foremost a children’s story. As a result, it’s actually cataloged with juvenile literature. It could an easy reader for native French speakers of a young age, and non-native speakers learning French, too. The illustrations help tell the story for even the youngest readers and read-ees.

Of course, it may also give you a craving for a super-sized cherry-flavored candy egg, despite all Charlotte’s troubles. While we can’t help you there, we CAN help you to another serving of culinary book history next week…

One thought on “The Incredible Shrinking (and Growing) Girl”