Sometimes, as you may well know, I find feature items for the blog while looking for other items. I was hunting the shelves for a few publications (I wanted to scan images for the next 2-3 weeks and see if I can get ahead!), when I found Victory Breads for One Hundred: Suitable for Hotels, Boarding Houses, Institutions, published in 1918. We’re used to seeing “victory”-inspired books and pamphlets relating to food in World War II, but not nearly as many from World War I. It practically jumped off the shelf at me! 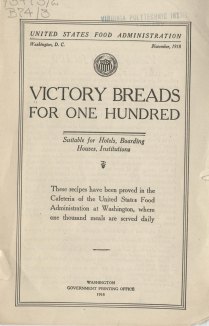 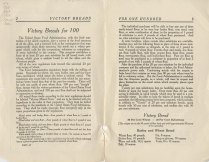 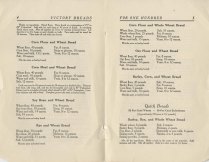 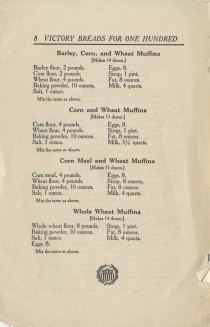 This pamphlet may not look like much on the surface, but it has a great deal to say about a food staple during the war. The United States Food Administration (USFA) was a World War I-era federal agency focused on the administration of allies’ food reserves. In this case, the emphasis is on saving wheat and wheat flour, with a goal of cutting wheat use by 20%. The first two pages talk about the overall plan, the reasoning behind it, and the potential wheat substitutes or additions you might see in flour. About 1/3 of the recipes are for breads containing an 80/20 mix. The rest are made up of quick bread and muffin recipes of a 50/50 wheat-substitute blend. In wartime or not, there’s no reason you can’t try something different when you’re making bread, so think about one of these recipes next time you’re in the mood for a homemade loaf (or 50!).

If you’re interested in the USFA, you can learn a more on the National Archives website. If you prefer visual appeal, the site also features from posters from the USFA, too, encouraging both patriotism and food savings. Meanwhile, you can probably find me wandering the stacks in search of whatever else we might have on World War I, the USFA, and food for “Victory!”

One thought on “Victory Bread?”