There’s something in the air in Blacksburg. Literally. If you were outside last night or this morning, you may have noticed some white snowflakes drifting down. Not enough to stick, but enough to remind us that November is half over. The cold that has arrived has driven me into the arms of my favorite fall and winter comfort: tea. (Today, it’s a Ceylon black called “Hazelnut Cookie.”) However, I doubt I’m the only one equally tempted by hot cocoa this time of year. You’ll find quite a stash of both beverages in my office. These days, many of us are used to those neat little packages that just need a hot liquid, but there was (and can still be!) quite an art to making good cocoa. 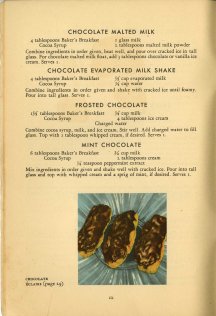 Best Chocolate and Cocoa Recipes dates from about 1931. It was produced by Walter Baker & Company, Inc. (hence the use of Baker produces in all the recipes, of course). There were LOTS of these pamphlets, year after year. In fact, back in 2012, we did a post about a 1928 one, which is currently the only other one in our collection.  (We have recently acquired a 1920s Baker’s Chocolate label, but it’s not quite processed yet!) The image on the front cover was the iconic logo for the company. As you can see from the chocolate centerfold, it appear on many of their products.

Clearly, cocoa is more than just a powder in a package. And chocolate drinks aren’t just for winter. However, it may hit the spot on a chilly evening. Many of the recipes in the pamphlet call for a dash of salt to help bring out the flavor. But if you’re feeling adventurous, you might try a hint of cinnamon, or even a dash of chili pepper.

Whatever you do, stay warm out there!

One thought on “Cocoa Syrups, Powders, Nibs, and Bars!”