As our History of the American  Cocktail Collection expands, we’re pleased to announce the creation of a new Cocktail Ephemera Collection (Ms2013-027). The collection is place to group like materials and provide easy access to them. As we acquire new items, we will continue to add them. You can see the current finding aid, with the early framework of the collection online. To start, we have some postcards and pamphlets. We also have the first of our advertising/promotion materials: a c.1880 counter top display for “Tolu Rock & Rye.” 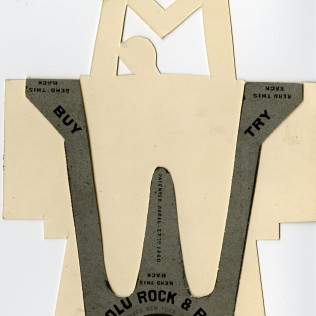 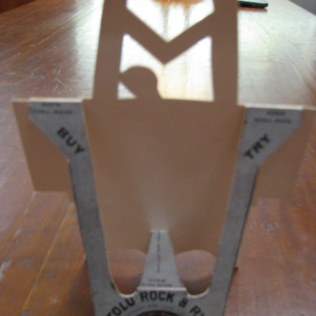 This particular “Tolu Rock and Rye” appears to have a short history of distribution between 1880 and 1881 (possibly a little later) as a patent medicine. It was sold pre-made in bottles for ease and efficiency of consumption, a characteristic common to patent medicines (and cocktails in the 19th century, too!). And, like many patent medicines, it seemed to cure a laundry list of ailments.

Classification of rock and rye as a “medicine” in the late 19th and early 20th centuries was actually a very clever strategy. It made it easy for suppliers to avoid unwanted attention from the temperance movement and to avoid the taxes placed on alcohol at the time. As a “medicine,” Rock & Rye might be drunk straight, or mixed with hot tea. Recipes ranged from a basic mix of whisky and rock candy to more complex blends including citrus and herbs. This “Tolu Rock and Rye” likely also contained tolu itself, a fragrant tree resin. Following Prohibition, Rock & Rye continued to appear as a cocktail in bars and saloons.

Information on the item suggests this “Tolu Rock and Rye” was distributed by Donaldson Brothers, New York (likely among others). Contemporary newspapers and advertisements indicate this particular brand of “Tolu Rock and Rye” was a secondary company of Lawrence and Martin Company of Chicago. Rock and rye concoctions containing tolu, however, were produced by several companies during this period.

Modern cocktail books and websites include new and classic recipes for Rock & Rye, if you’re looking to try it at home. Recipes range from simple to basic. One of  nice thing about this drink is that there is room to experiment with flavors.

We hope to make existing (and future) items in this collection available online, so be sure to check back with us. In the meantime, feel free to stop by. This is very much a visually-based collection and there is plenty to see!